In an April 2012 news story, Bloomberg News reported that the UAS (Unmanned Air Space) industry in the United States is valued at $5.9B with an estimated increase to $11.3B by 2021 – less than 10 years away. With this rapid development the need for UAS use in civil operations and competition in UAS manufacture and operations from other countries such as Israel, it is imperative that the FAA immediately set standards to integrate UAS into the national airspace, as well as designate national test sites to facilitate the process. There are to be 6 sites designated in the next year.

Oregon State University ( the Champions to the project) recommends the FAA consider the strengths of Central Oregon/Northwest as a test site. Central Oregon has a large area of restricted air space with low traffic of which could be utilized as test space. Areas include the Juniper MOA and space up on the Warm Springs reservation, with the Madras Airport just south. Central Oregon offers a very diverse geography, consistent climate, substantiated infrastructure and desirable lifestyle.

OSU Cascades and Central Oregon Community College are offering classes specific to Unmanned Vehicle Systems making it apparent that Central Oregon/Northwest should be chosen to be one of the test sites. 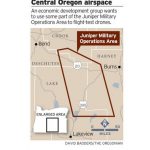